Dominic de Guzman was born in Caleruega (Spain) in 1170. His parents were Felix and Jane de Guzman. Both his mother and his brother Mannes have been Beatified in the Church. He himself was ordained a priest of the Canons Regular. St. Dominic died in  Bologna (Italy) on August 6, 1221 and was canonized on July 13, 1234. 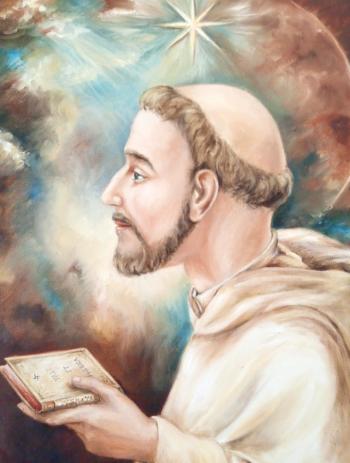 His life and holiness

While on a mission with his Bishop Diego, they passed through Languedoc in southern France, there they encountered the Albingensian heresy, (1 Tim 4:1-5) which was deeply rooted in the hearts and minds of many Catholics in that region. Both Diego and Dominic were grieved at this. Much effort had been made already by the Pope and his legates to try to stem the tide of this great error, but to no avail. With the assassination of one of the papal legates a more political tone entered into this great dilemma and a crusade of arms ensued.

St. Dominic, however, remained apart from such fighting. He was convinced of the words of St. Paul, who said: “The Word of God is living and active; sharper than any two edged sword...” (Heb 4:12)   Thus he chose to fight, not with a sword of metal but with the invincible weapons of the life giving Word of God and prayer. He once reminded a Bishop: “...heretics are more easily won over by examples of humility and virtue than by external display or a hall of words. Should we not rather arm ourselves with devout prayers and, carrying before us the standard of true humility, proceed in our bare feet against Goliath." (Libellus of  Bl Jordan,  para. 34) 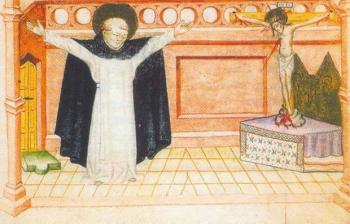 Dominic was a man of faith and a man of prayer; a man of compassion and mercy for poor sinners. “His frequent and special prayer to God was for the gift of true charity capable of laboring for and procuring the salvation of men, since he deemed that he would be a true member of Christ only when he could devote himself entirely to winning souls, like the Lord Jesus, the Savior of all men, Who offered Himself completely for our salvation.”  Often he would cry out: “O God! What will become of poor sinners?”

He was a man of the Word and his preaching of the Word began with the witness of his life. A man can only preach what he lives. His preaching was nourished in contemplative prayer and silence. It was said that he would speak only to God or of God! Dominic was a man of purity of heart and body. He realized with the help of God’s grace the profound need of the moment: to bring Christ back to the hearts of men and women in a time of confusion and deception, not unlike today. 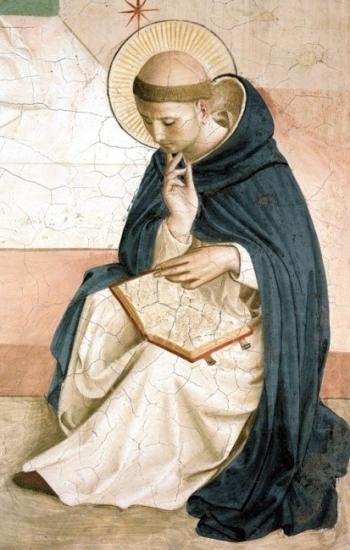 With the approval of the Pope, he became the founder of the first missionary Order in the Church – the Friars Preachers. His followers would be sent to the ends of the earth, just as the first apostles, to preach the Truth of the Gospel of Jesus Christ for the salvation of souls. They would follow the example of St. Paul: “...preach the Word, be urgent in season and out of season...”  ( 2Tim 4:2)

St. Dominic was a man who loved much and sacrificed himself in proof of that love. He journeyed across Europe to Rome more than once on foot, to obtain the necessary approval for the new missionary Order. Not only did he travel in such poverty but he sought to make it more sacrificial by removing his sandals and passing over the rocks and through the thorns and thickets bare footed.  No sacrifice was too much for the salvation of souls. Many miracles, including raising two persons from the dead, are attributed to him. Such was his holiness.

Like the Divine Master he served, St. Dominic’s life became a book of preaching. He has left  us no volumes of writings, only his life, by which we can learn how to follow Christ more closely. “...as far as possible, my brethren, walk in the steps of our father and, at the same time, give thanks to the Savior, Who has provided for His servants such a leader to follow in this road we travel and through him has regenerated us into the light of this religious state.”      (Libellus  Bl. Jordan, para. 109) 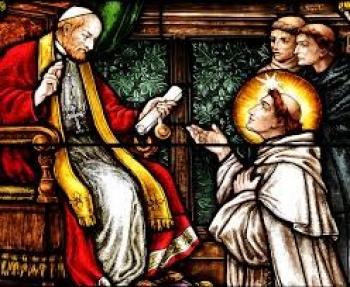 Death of the Founder

At his death he exhorted his brethren to “imitate me as I have imitated Christ.” He left this counsel: "My very dear brothers," he said, "this is what I leave to you as a possession to be held by right of inheritance by you, my children. Have charity, preserve humility, and possess voluntary poverty."   And he assured his grieving brothers that he would be more helpful to them from where he was going than he could here below. His incessant prayer that began on earth is now eternal. 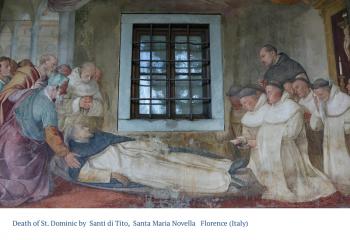